Founding of the formal union that has received the approval is March 1958, but the collection of the same trade as a awning Brotherhood has been formed from 1919. The union had been efforts to improve the status of the industry and correct an adverse effect on the business credit. Under the controlled economy during the war, union members by the government of the enterprise development is the consolidation in some of the control company, to keep the lifeline of the union spent the utmost of the era. After the war, instantaneously reorganized the same name of the Chamber of Commerce and Industry Federation, this organization became of the union mother. Among the companies disparity deepens in high growth process of the economy due to post-war reconstruction, between the small and medium-sized companies and small businesses in the industry took place momentum of union establishment of order to respond to this situation. Finally,in 1957 December 25, held on the inaugural meeting, based on the Small and Medium-Sized Enterprise Cooperatives Act "TOKYOTENMAKU TENT AND AWNING ASOCIATION OF COMMERCE AND INDUSTORY" has been established.This is the history of the inauguration of the union.    Contact 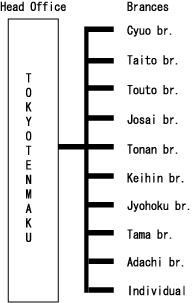 March 28,1977
Specified in the " Tokyo model union " from the Governor of Tokyo
October 4,1977
Designated recommended to the "Model union of small business" from the Tokyo Metropolitan Small Business Associations Federation President.